Where Is 221b Baker Street? - George Barnsdale

Where is 221b Baker Street?

We have been taking a look at famous front doors recently and our next iconic entrance comes from one of the best loved fictional characters on screen, and in literature for over 100 years, but is the door also fictional?

Who doesn’t love a good detective drama? We are a nation of gripping ‘whodunnit’ fans, and none more than that of the owner of this door.

So how about solving the owner of the door with a bit of your own detective skills?

As the sleuths amongst you have hopefully already gathered, the owner of this famous door is that of a famous fictional detective, he is known for his unique mind, ability to piece together clues and a skill for picking up on minor details to catch the guilty suspect.

The final clue is that the owner of this door lived at 221b, Baker Street with his friend and assistant, Dr Watson.

So, who deduced that the door was that of the fictional private detective created by British author Sir Arthur Conan Doyle…Sherlock Holmes?

A brief history of 221b Baker Street:

The stories of Sherlock Holmes and his companion, Dr Watson, first went to print back in 1887 and since then its popularity has risen beyond compare. Although the tales of Sherlock Holmes were not the first fictional detective novels written, they have been the most popular.

Such was the characters popularity, that many believed him to be a real individual. As with that of the detective’s address. Many of you will remember the address as to where the fictional character lived as that of 221b, Baker Street. However, the fact is that at the time of its first concept, Baker Street only went up to Number 85 and it was not until the next century that the street was extended and the numbers went past 221, with still no actual residence marked as 221b.

In 1932, the Abbey National Building Society moved their headquarters into the premises at 219-229 Baker Street and they took the decision to employ a secretary to answer mail addressed to Sherlock Holmes.

The Sherlock Holmes museum opened its doors in 1990 and erected a plaque stating the address as 221b Baker Street, much to the annoyance of the building society, and a lengthy dispute ensued that lasted until they left the building in 2003.

The vacated premises of The Abbey House have since been converted and no mention has been made of 221b Baker Street.

Although the address might be in question, the actual door used in the filming is real. At its height, over 12 million viewers tuned in to watch the BBC drama, and many will have spotted the iconic black door with distinctive gold door furniture of numbering, door knocker and letterbox. 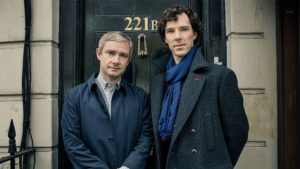 The actual address for filming of the BBC series is not on Baker Street though, but an 8-minute drive across the capital, to 187 Gower Street. Baker Street has so much Sherlock Holmes related signage, shops and other paraphernalia that it has become too complex to film on the street, plus the influx of crowds wanting to catch a glimpse of the home of Holmes, has meant a new location had to be found.

The exterior of the address is easily the most recognisable of all locations associated with the series, and the front door to the characters flat is where most of the adventures begin.
The actual door is a permanent fixture on the street, with the distinctive door knocker and letterbox on view for all to see. However, the numerals are different, as they revert to the actual address of 187, but during filming, the front door has its regular door numerals removed and replaced with the famous 221B ones.

The café that the pair live above is also actually found on Gower Street and receives many visitors from excited Sherlock Holmes fans each week, although visitors wanting to see behind the famous door will be disappointed.

The flat behind the door is very different to that seen on TV, as filming of the interior shots for 221b Baker Street are actually conducted across the Welsh border in studios in Cardiff.

Transforming your front door into the detectives

If like the millions of tourists that turn up to the locations, you are a fan of the Detective’s taste and style then you can turn your own entrance into a 221b replica. At George Barnsdale we have manufactured many similar timber doorways to that of Sherlock’s home. 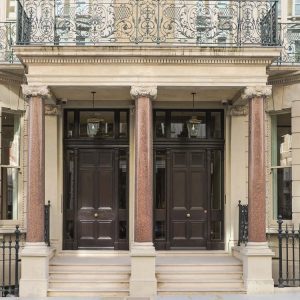 We have also replicated similar fanlights to that of the detective; 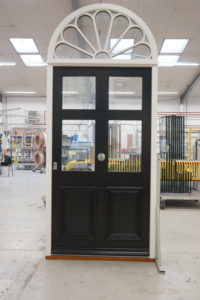 Our door furniture is similar also and our various ranges will cover all your needs when it comes to your front door design needs: 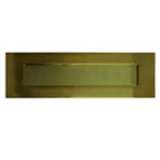 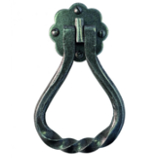 If you have enjoyed our 3rd famous doors blog, then why not catch up on our previous 2 below:

How much would you pay for the Notting Hill Blue Door

What goes on behind the door at 10 Downing Street