Donington based timber products manufacturer, George Barnsdale have been honoured with the accolade of Lincolnshire Fire and Rescue RDS Employer of the Year for 2018! 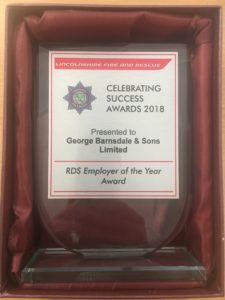 Established in 1974 the Lincolnshire Fire and Rescue Service was set up to service the statutory fire and rescue needs of the county. Lincolnshire is the second largest county in England and the service has plenty of area to cover.

The area has one of the highest road traffic collision rates in the entire UK and the area is liable to flooding in addition to the usual core requirements of any fire service.

In addition to these duties, the Lincolnshire Fire and Rescue service works in partnership with the East Midlands Ambulance Service to assist with the provision of emergency medical care to parts of the county.

Operating from the Donington Fire Station, employees from George Barnsdale have been supporting the Lincolnshire Fire and Rescue Service since it set up in 1974 and have been helping assist the local fire crew since before then. 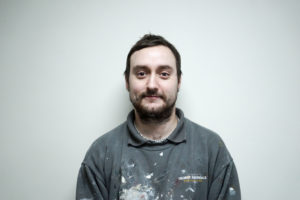 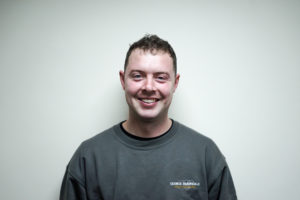 Winning the Lincolnshire Fire and Rescue RDS Employer of the Year Award for 2018 is a real honour for the Lincolnshire based company and a true recognition of the great work that their staff do to assist the counties emergency services.

It is not the first time George Barnsdale have won the award, as they have won the prestigious accolade on numerous occasions since it was first issued by the Lincolnshire Fire and Rescue Service, with the last time being in 2015.

Previous post: Donington still leading the way in discovery!
Next post: Home décor! Why more and more homeowners are turning to timber.