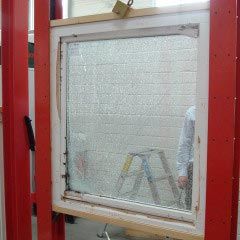 Do we need to ignore European Standards to have secure fenestration products? The fenestration industry and Secured by Design seem to think things in the UK should remain as they are. Is it another case of “Metric Martyrs”?
For the last few years we have had BS7950 for window security and PAS24 for door security. As there is a European series of standards, EN1627-30, the British Standards have been withdrawn. However, as no one is willing to use these standards, there is now a new PAS24 standard which states that the windows should achieve EN1627 RC2 and RC3 for doors, or they can comply with the details shown in the annexes which are effectively the BS7950 and PAS24 standards.

The RC2 and RC3 levels are substantially more severe than the requirements of the old British Standards which means they will not normally be used.

It is likely that in the future fenestration products will require CE marking for security. When this happens, the category can only be declared to the European Standard.

Our E1 tilt and turn window has already passed EN1627 RC2 in its standard form. We are currently looking at our DS11 inward opening doorset and believe it can pass EN1627 RC3.

It does seem a pity that the industry is trying to delay the introduction of European Standards when they will eventually have to be used but more importantly they can be used immediately to enhance the security of our buildings.